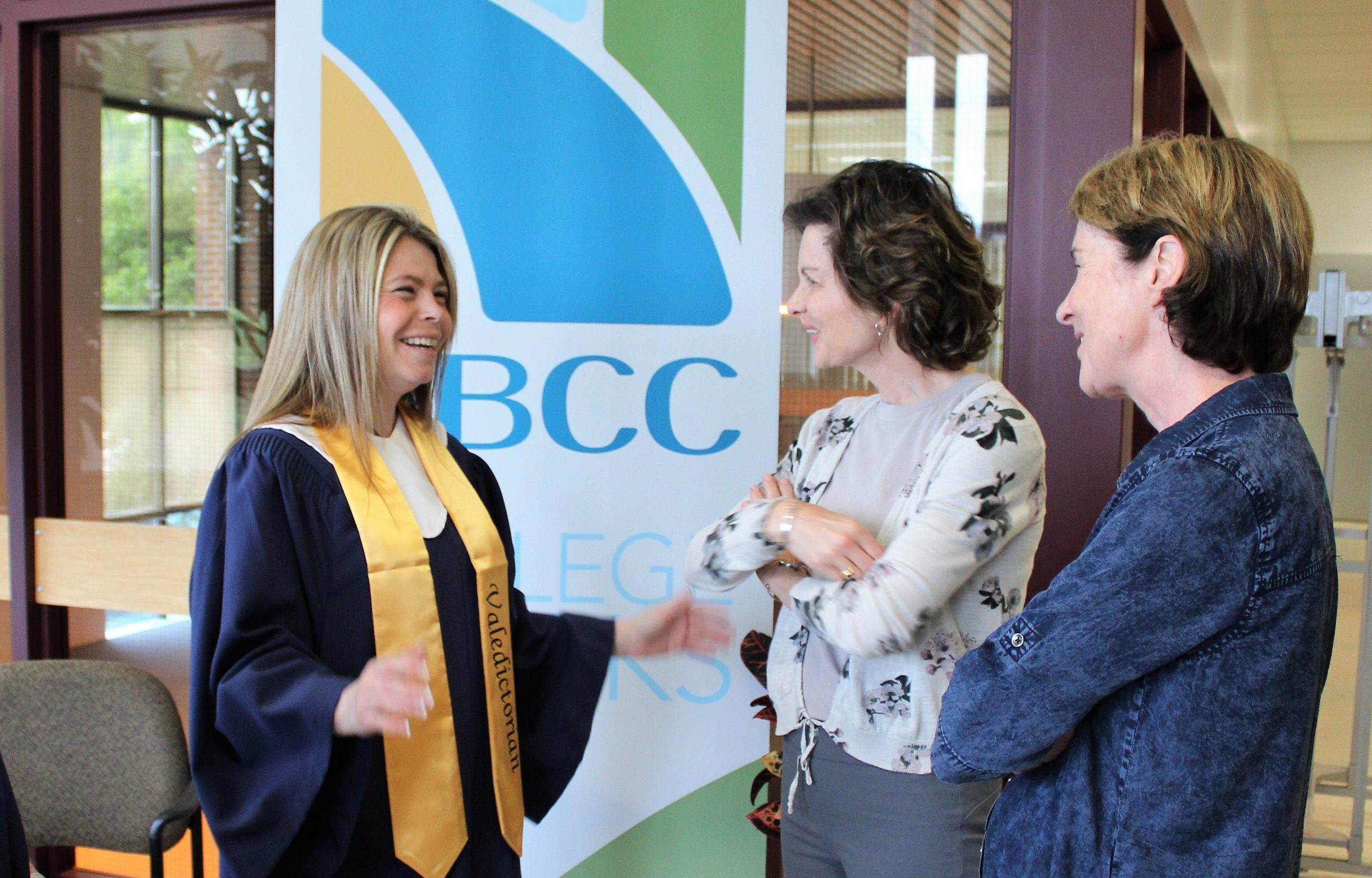 Brandy Ruff, left, talks about her NBCC experience with Laura, centre, and Ann McCain of the Harrison McCain Foundation.

WOODSTOCK – June 20, 2019 was one of the best days of Brandy Ruff’s life. That was the day she received her NBCC diploma in Personal Support Worker: Acute Care, leaving behind the last vestiges of struggle and heartache from her old life and beginning in earnest a new life of hope, optimism and aspiration.

“It’s like I’ve come up from the gates of hell,” she said.

Ruff’s journey to her new life took nearly 10 tumultuous years, but once she enrolled at NBCC, a light appeared at the end of the tunnel. The name of that light was In Bloom.

A scholarship program for single mothers in transition, In Bloom brings together NBCC, the Harrison McCain Foundation and community partners like Sanctuary House to give women an opportunity to reach their full potential and inspire their children to dream big.

“When I grow up, I’m going to be a doctor, and Mummy is going to be my nurse,” proclaimed Addison.

With her diploma framed and her new career underway at Carleton Manor, Ruff is well on her way to reaching her full potential. Education and employment are just the beginning, however.

“I want a house. I want a yard where my children can play,” she said. “All the things we should have had all along.”

It’s been 10 years of my life upside down, but my feet never left the ground.

It’s been 10 years of so much sadness, but now my cheeks hurt from laughter.

It’s been 10 years of fear but now the unknown has come to light.

It’s been 10 years of trying and trying harder.

It’s been 10 years of let downs but now my feet are firm and I’m above ground.

It’s been 10 years but I know what proud means.

In 10 years, my life took me to trial and error, but now life couldn’t be more fair.

Ten years ago, Ruff was experiencing “financial ruin.” There was never enough money to make ends meet. She was tired of scraping by and knew there had to be more to life, and recognized that the only way to get there was through education.

To say Ruff has taken a non-traditional approach to education would be an understatement. She first enrolled in high school equivalency training at the Woodstock Campus in 2010. Pregnant with Emma, she got pneumonia and coughed hard enough to crack a rib. She had to take a month off from her studies, but she was determined to write her exam with the rest of her class.

The exam happened to be held on her due date. She wrote, but knew she hadn’t passed. She re-took the test a few days later with the same result.

“So I just had my daughter and put school behind me,” said Ruff. “But I knew that I still wanted a change. I saw everything that was going on at NBCC and I wanted to be part of it.”

A few years later, pregnant with Addison, she tried again. The spark of learning had been ignited and Ruff eagerly fed the flame. She eventually ended up in an Experiential Learning and Employment (ELE) program.

“That really changed things for me,” she said. “I brought my skills up and it got me started on showing up for life.”

While studying in the ELE program, she heard about a scholarship program called In Bloom. She wasn’t sure what it was about, but she went to an interview and soon learned that she had been successful.

With funding in place and a new confidence from her ELE experience, she took the first steps on the path to her new life. Along the way, she became one of NBCC’s biggest fans.

“My year here, I was NBCC,” she said. “For me, this was huge. I never took one moment for granted. I took every day as a real life learning experience. NBCC was such a life turnaround for me.

“This was my one shot,” she added. “It was just huge to be here and to feel like I was finally part of something.”

The In Bloom funding paid for Ruff’s tuition, books, supplies, print credit and child care expenses. The program also provided Ruff with some treasured NBCC swag, including a frame for her diploma and a jacket with her name on it – a significant item of clothing for someone who was so proud to be attending college!

At Christmas time, Ruff was overwhelmed to receive a turkey and all the trimmings, as well as gift cards to purchase presents for her daughters, courtesy of In Bloom.

“In Bloom really picked up the slack on what ISD (Integrated Service Delivery) didn’t fund me,” she said. “A lot of little things that made a huge impact.”

The program also provided Ruff with mentorship, which was a significant help for someone trying to juggle full-time studies with motherhood.

“My kids didn’t like me going to school, at first. They were used to me being home,” she said. “And it was a wild, wild ride. When I was having a bad day, I could go talk to Barb (McKinley, Manager of Student Development, now retired) and get over it.

“Barb was hugely supportive and is an overall wonderful person.”

Ruff’s NBCC experience changed her life, and the lives of her young daughters. With the support of dedicated NBCC staff and financial help from In Bloom, generously funded by the Harrison McCain Foundation, Ruff gained much more than a diploma from NBCC. She gained the skills, knowledge, confidence and determination to embark on a new chapter – one that will provide financial security and stability for her family for years to come.

As NBCC seeks to remove barriers to post-secondary education, stories like Brandy’s demonstrate the difference the College and its funding partners can make in learners’ lives. NBCC and In Bloom are transforming lives and communities, one learner at a time.

Continuing a culture of community in St. Andrews

Tapping into the power of education to change lives