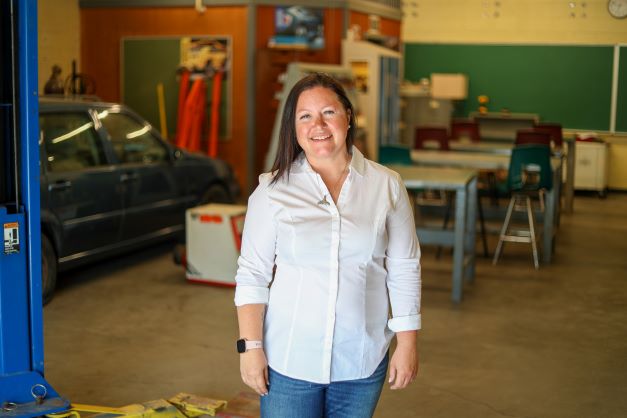 High school trades teacher Tara McNeill of Fredericton, telecommunications engineer Mathieu Savoie of Moncton, national security analyst Johanne McInnis of Saint John, and commercial real estate advisor Donna Green of Moncton were honoured by NBCC with Alumni Recognition Awards in a virtual ceremony on Wednesday, November 3. McNeill is also the recipient of NBCC’s prestigious Friend of New Brunswick award, recognizing an individual who has made significant contributions to the culture, reputation, and economy of New Brunswick.

Tara McNeill has a passion for inclusivity in the skilled trades, and she’s sharing it with New Brunswick’s next generation of tradespeople. The NBCC double alumna (Class of 1997, Communication Arts, and Class of 2011, Automotive Service Technician Apprenticeship) is a compelling role model for youth.

As a skilled trades instructor at two Fredericton high schools, Tara has opened up the world of skilled trades as a career option for hundreds of young people, including those currently under-represented in the trades – young women and the developmentally delayed.

Her advocacy for inclusivity, combined with her efforts to tailor skilled trades education to the ability of individual learners, earned her a National Inclusion Award from the New Brunswick Association for Community Living this year.

Students who take Tara’s class learn at their own pace as she adapts her teaching to the ability level of the individual. Those who learn easily and quickly are given stretch assignments; those who struggle, or even need the whole curriculum adjusted to match their learning level, get personal learning plans with plenty of one-on-one support. This had led Tara to forge some truly meaningful relationships with her developmentally delayed students.

Tara is a powerful promoter of women in the skilled trades. She takes her position as a positive role model for young women very seriously and actively seeks opportunities to spread the word about the opportunities that exist for female tradespeople, including serving as guest speaker at Women In Trades events.

Outside of the classroom, Tara engages her students in extra-curricular activities including the schools’ drag racing teams. She also volunteers as a proctor in Skills Canada competitions, which showcase the skilled trades to youth in the community.

Getting back to the books

IN HIS WORDS: New opportunities at home in NB