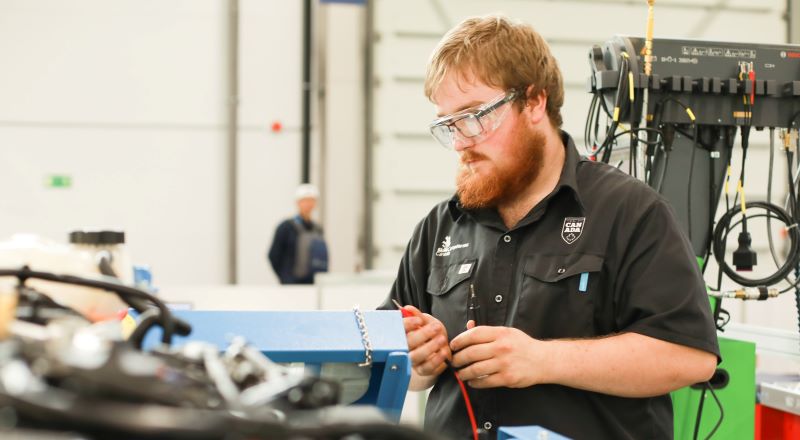 Kazan, Russia might not be in your Top 10 tourist destinations, but it was the trip of a lifetime for NBCC alumnus Pascal Doiron and his trainer, instructor Lloyd Keirstead.

Doiron and Keirstead spent two weeks in Kazan in August as part of the Team Canada contingent at the World Skills Competition 2019. It was the culmination of months of hard work and practice by Doiron, who competed against the best of the world in Automotive Technology, and Keirstead, who provided on-site advice and encouragement.

“The trip was amazing, and the fact that Pascal did well is great,” said Keirstead. “He was letting it all show in the competition and it was awesome.”

Doiron’s Skills journey began in 2017, when he won a competition among his classmates in the Automotive Service Technician program at the Moncton Campus, which earned him entry into the Skills New Brunswick contest. After winning there, he went on to the nationals and earned a gold medal. Then it was on to Edmonton for the national Skills Canada competition in 2018, where he qualified for Team Canada.

From there, all roads led to Russia, where Doiron finished 12th out of 35 competitors from around the globe and earned a Medallion of Excellence.

“I was 40 points out of 1,000 off a podium finish,” said Doiron. “That’s a four per cent difference, which is pretty small. Mostly, I made a lot of new friends. It was great to meet and talk to someone who has the same passion for cars that I do.”

Automotive Technology was one of more than 50 trades represented at World Skills, which brought 1,700 competitors from 60 countries to Kazan. Keirstead, an instructor at the Moncton Campus, was overwhelmed by the scope of the event. Competitions were held in a brand new, state-of-the-art 800,000 square foot purpose-built facility in front of 150,000 spectators.

“The sheer size of it blew me away,” said Keirstead. “The opening and closing ceremonies were held at a huge stadium, and it kind of reminded me of the Olympics. (Russian President Vladimir) Putin was at the closing ceremony. This was a huge deal for Russia, and to think that we were part of it…..it blew me away.”

Both Doiron and Keirstead were awed by the welcome they received from the city of Kazan, which is home to 1.2 million people. The welcome mat had been put out and all the Skills competitors and their supporters were embraced.

“The people were really nice, and everyone was really happy to have us there,” said Doiron. “The competitions were amazing. I’ve never been anywhere nearly as nicely set up or well-equipped as this. It was really something else.”

Keirstead had the opportunity to take a walking tour of the city with an English-speaking guide. Throughout Kazan, billboards, buses and mascots promoted World Skills.

“We saw so much. This really opened my eyes to Russia,” he said. “The people were friendly as all get out. It was just an amazing, amazing trip; everything was top notch.”

Skills Canada is a Canadian non-profit organization dedicated to the promotion of careers in technology and skilled trades. Doiron, who graduated from the Automotive Service Technician program in 2017, works at JP’s Garage in Dieppe. His career objective is to earn his Red Seal certification.

We Are Wabanaki: NBCC to showcase Indigenous artists at Gelu’lg Maw-a-paw Gala