The sweet taste of entrepreneurship 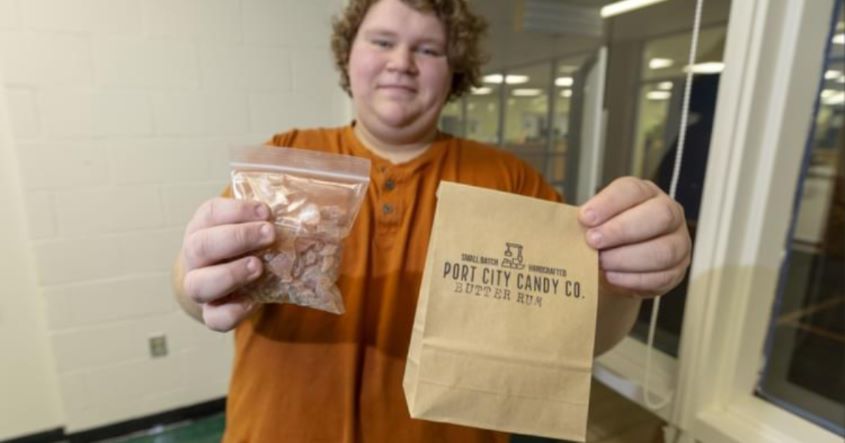 SAINT JOHN – At New Brunswick Community College (NBCC), staff strive to teach learners the skills they’ll need to successful in their chosen field after graduation. Sometimes, they get to see learners put those skills to work even before graduation.

Second-year Business Administration: Marketing student Noah Donovan is one of those learners. Armed with the skills he obtained in class and strong entrepreneurial spirit, Donovan has started his own business – Port City Candy Co. His first foray into the candy market has been a resounding success. Over the busy Christmas shopping period, he sold out of his stock multiple times and racked up total sales of more than 1,000 units.

“I have a real passion for entrepreneurship and branding,” said Donovan. “I would consider myself a serial entrepreneur. I like coming up with innovative ideas and being able to plan things from start to finish.”

The spark behind Port City Candy Co. was ignited when Donovan happened across some old photos of traditional candy-making. He was intrigued by the images and, the more he learned about the traditional techniques of making candy, the more he wanted to give it a try.

“I realized that the candy-making tradition is dying,” he said. “The science and art behind it is really fascinating.”

Port City Candy Co. produces traditional hard candy in fun flavours like butter rum that are popular with today’s market. The candy is vegan and gluten-friendly and mostly organic.

“It’s a return to tradition, with a modern twist,” Donovan said.

The small-batch, handcrafted treats are sold primarily online, but Donovan eventually hopes to invest in a workshop and retail space. In the meantime, the lessons learned at NBCC are coming in handy as he builds his candy empire.

“NBCC taught me a lot about networking and how to reach out to people,” he said. “I’ve learned how to fine tune my writing for social media and how to do a business plan. I love NBCC; the experience I’m getting from running my own business is a great add-on to what I’m learning in class.”

Notes from the President: 5 Resolutions for a New School Year

Extending our reach through innovation

Building for the community