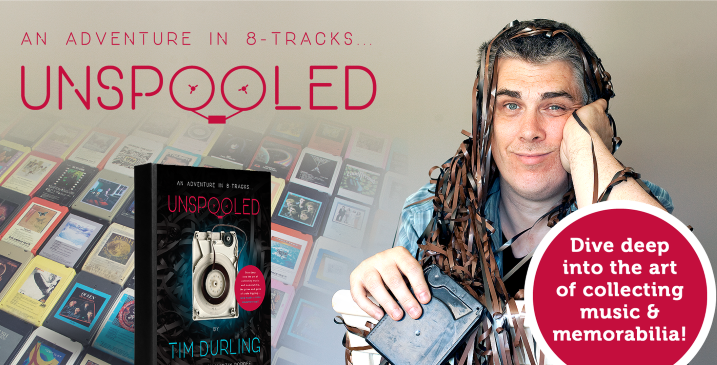 When Tim Durling was roaming the halls of NBCC Woodstock Campus in the 1990s, the seeds of an idea planted themselves in the back of his mind. Now, after nearly 30 years, those seeds have sprouted, flowered, and been harvested in Unspooled…An Adventure in 8-Tracks, a new book that brings Durling’s lifelong passion for music and collecting to life.

“I have the fondest of memories from my time at NBCC,” said Durling, who graduated from Communication Arts: Radio Broadcasting in 1994. “Working at the college radio station solidified for me that I wanted to be surrounded by this type of stuff….music and trivia and collecting. Would I have written this book if I hadn’t gone to NBCC and met the people that I did there? I doubt it. The friendships that I had at NBCC have lasted for years. That’s where you find ‘your people’.”

Among the relationships that Durling cultivated at NBCC was a friendship with Matt Phillips, who was studying in the Print Journalism elective of Communication Arts. For 30 years, they’ve shared life’s ups and downs. Each served as the other’s best man at his wedding. And Phillips was instrumental in getting Unspooled off the ground. He did all the design in the book, as well as the promotional work behind the Kickstarter campaign that funded the project.

“For 30 years, Matt has always been a good friend, and a very talented designer,” said Durling. “Matt brought this project to life. The book wouldn’t exist without his input.

“I’m hoping that people will see this book and his design, and get in touch with him for their design projects.”

So what, exactly, are Durling’s Adventures in 8-Tracks? It’s an exploration of a musical medium that has fascinated Durling, who works as a creative writer and announcer for Bell Media, his whole life. The 8-track tape used magnetic tape sound recording technology and was popular from the ‘60s right through to the ‘80s, when it was eclipsed by the cassette tape.

While the technology is outdated, it still captivates Durling, who is a bona fide music collector.

“When you think back to the ‘80s, that was a time when you couldn’t just go on the internet to find something you wanted,” said Durling. “You had to physically go out and find it. And when you did find it, you treasured it.”

Unspooled looks not just at the technology of the 8-track, but also at the psychology of collecting.

“It started out as a list of all the albums that exist in 8-track form, and from there I added articles from other music collectors and then I got into why we collect. What is it about collecting that makes us happy? Why do we spend so much time and money collecting these obscure artifacts? It’s about music collecting and how music makes you feel. I think it will speak to a lot of music collectors.”

A meal fit for the Premier

The power of partnership – NBCC and NB Power