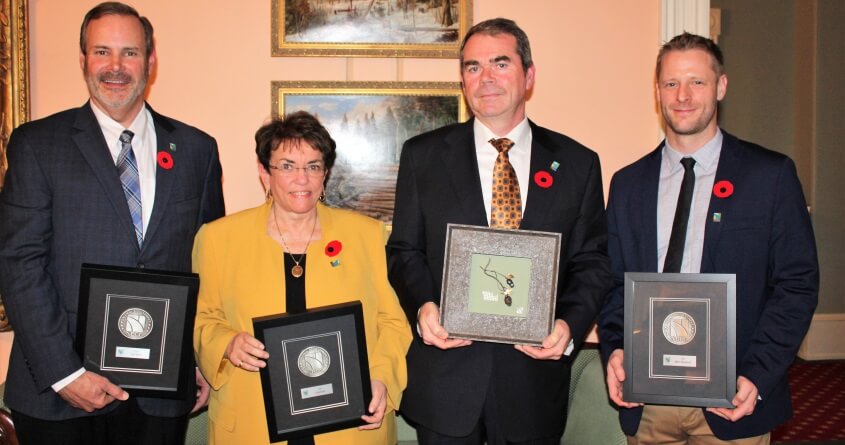 “NBCC Alumni are everywhere, transforming lives and communities across New Brunswick and beyond,” said Luscombe. “Each of our 2018 Alumni Awards recipients has achieved success and has had a positive impact on cultural, social and economic elements of life in New Brunswick.”

This year marks the fourth annual Alumni Recognition Awards. Recipients are selected by a committee of NBCC staff and alumni. Nominations are welcomed year-round and can be submitted by anyone who knows an outstanding NBCC Alumni. The nomination forms can be found at www.nbcc.ca/awards.

“Congratulations to each of our award recipients, and thank you to those who nominated these very deserving alumni,” said Luscombe.

FRIEND OF NEW BRUNSWICK
This award recognizes an alumna or alumnus who has made significant contributions to the culture, reputation, and/or economic prosperity of the Province of New Brunswick.
Sean Dunbar

When it comes to craft beer, Sean Dunbar has put New Brunswick on the map. A 1984 graduate of the Accommodation, Food and Beverage program at the St. Andrews campus, he’s transformed the New Brunswick craft beer industry. He’s best known for establishing the Northampton Brewing Company, brewers of Picaroons Traditional Ales, and has been a supportive adviser for others starting out in the industry. In fact, he was nominated for the Friend of New Brunswick award by another local brewer! Sean is a keen supporter of New Brunswick performing arts and live music and has contributed to many local charities and artists.

A lifetime of leadership

Lois Scott has spent nearly 50 years as a leader within both the public and private health care sectors. Lois has served as a member of boards and advisory committees for a great number of organizations, including international tele-health professional organizations, National Research Council of Canada, Canadian Society of Tele-health, Issac Walton Killam Health Center, 3+ (Greater Moncton’s Economic Development Agency), Nurses’ Association of New Brunswick, Canadian Patient Safety Institute and Friends of The Moncton Hospital Foundation.  She was also one of the founding members of NBCC’s Board of Governors and served as Chair from 2014-16.

A taste for success

Bill Allen has built a restaurant empire. His company, Fresh Casual Restaurants Inc., includes five Swiss Chalet Restaurants, two Harvey’s locations and the Aulac Big Stop travel plaza. He employs more than 300 people in southeastern New Brunswick and his team has been recognized for sales and service excellence. Bill served as the Chair of the board of Restaurants Canada, a national association representing 30,000 food service businesses from 2016 to 2017 and currently sits on the board as an executive director representing New Brunswick. He is currently Chair of the board of Groupex Systems Canada, a food service group purchasing company that works with more than 5,000 independent restaurants across Canada.

The art of achievement

Matt Shepherd’s training has taken him to the pinnacle of his industry. As a supervising animator with Sony Pictures and now as an animation lead for Animal Logic, Matt has more than 35 production credits to his name, many of them box office blockbusters. He’s currently working on The Lego Movie 2. His resume also includes  Hotel Transylvania, the Smurfs movies, The Emoji Movie, Storks, Kahlil Gibran’s The Prophet and Sausage Party. A proud NBCC alumnus, Matt stays connected to NBCC mentoring animation graduates and volunteers as a keynote speaker for the Jalloo Festival.

A journey of learning