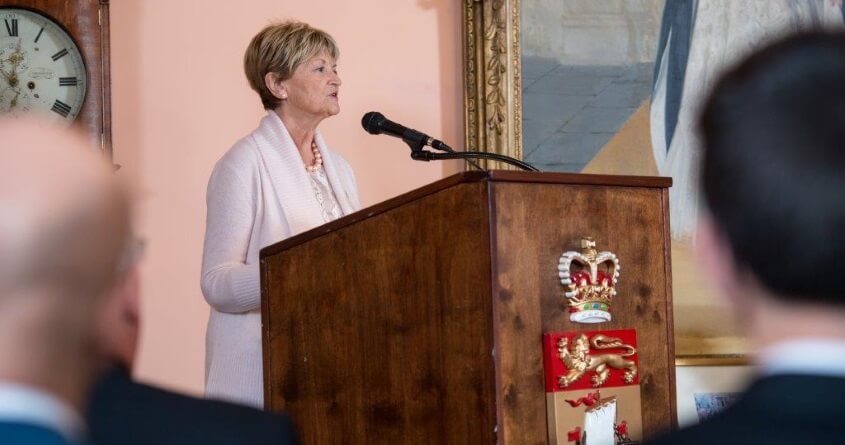 Fredericton – New Brunswick Community College (NBCC) President and CEO Marilyn Luscombe was recently recognized by Colleges and Institutes Canada (CICan) with the Distinguished Service Award. The Award was bestowed by the Presidents’ Leadership Network of CICan during the association’s annual conference. The Presidents’ Leadership Network represents college presidents from more than 120 colleges across Canada.

As the inaugural President and CEO of NBCC, Luscombe has been instrumental in leading the College’s transition from being part of a government department to its current Board-governed provincial Crown corporation status. Her leadership, vision and passion have brought transformational changes and opportunities to the College, including new programs, increased research capacity and new community service partnerships.

“As a Board, we have seen first-hand Marilyn’s dedication to NBCC and the social and economic interests of our Province,” said L. Paul Elliott, Chair of the NBCC Board of Governors. “Since her arrival at NBCC in January 2011, Marilyn has inspired us with her vision, her passion and commitment to learners, as well as her openness and transparency.”

Luscombe was acknowledged not only for her significant contribution as NBCC’s inaugural President and CEO, but also for her impact on the college and institute sector as a whole. She has had a long and distinguished career in post-secondary education, occupying senior leadership positions at several colleges. Before her appointment to NBCC in 2010, she had already worked at the College of the North Atlantic for fifteen years and had been President and CEO of Selkirk College in British Columbia for over ten years. She also served nationally as a Board member and the Board Chair of CICan, and has been involved in many national initiatives over the years, including advocacy events and leadership institutes for those aspiring to vice-president and president roles.

“Marilyn is an inspirational leader for many of us in the college and institute community,” said CICan President and CEO, Denise Amyot. “She is a passionate advocate for college education who was not only able to lead NBCC through a profound transition, but also took that opportunity to build stronger ties with the communities it serves. She believes in giving back and has made community service a core value at NBCC through initiatives such as the wonderful #TransformNB campaign, which encourages students and staff to get involved in their community.”