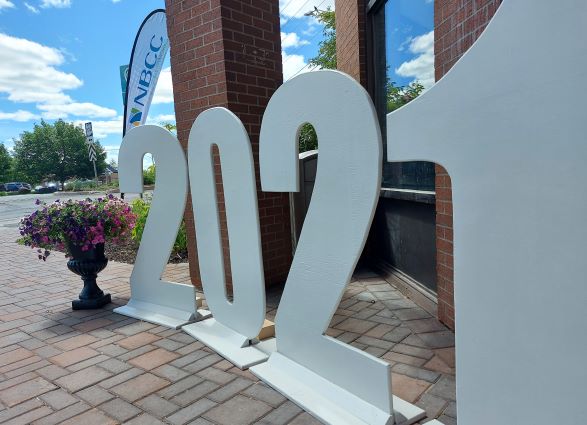 Four days of graduation celebrations at New Brunswick Community College (NBCC) this week culminated in welcoming 2,359 graduates into its robust network of more than 53,000 alumni.

With public health restrictions continuing to prevent NBCC from holding traditional large ceremonies, the College hosted a series of smaller ceremonies throughout the week. Graduates had the opportunity to celebrate with their classmates and invite a limited number of guests to watch them receive their diplomas, leading up to the premiere of a virtual ceremony.

“You’ve all made sacrifices and worked hard, giving up other things in your life that are important to you, to come to NBCC and finish your programs,” said Mary Butler, President and CEO of NBCC, in her address to graduates. “But with your sacrifices come some very rich rewards – increased employment and earning potential.”

A study of NBCC’s 2019 graduates, conducted a year after graduation in the middle of the COVID-19 pandemic, indicated an employment rate of 91%. College-educated New Brunswickers earn, on average, 35 per cent more than those with an education level of high school only.

Grad week also marked the official release of the summer 2021 edition of Rise, NBCC’s Report to the Community. Appropriately titled Ready for Impact, this edition focuses on the significant impact NBCC and its learners have on the economic and social prosperity of New Brunswick.

Katrina, originally from Calamba, Laguna, Philippines, graduated at the top of her class with a GPA of 4.300. During her time at NBCC, she served as Local Student Union Secretary for the Miramichi Campus and completed a part-time research practicum with NBCC and Black Lives Matter New Brunswick. She was also actively engaged in Child and Youth Care program partnerships including Youth Night, Girls on the Move, and Youth Engagement.

School of Business, Hospitality and Tourism

Taylor, originally from Fredericton, served as Vice-President, then President of the NBCC Student Union and the Local Campus Union in Fredericton. He participated in many College activities while at NBCC, including Shinerama and College-wide Service Days.

Rey Mar was always willing to help his classmates and quickly took on a leadership role within his program. Outside of the classroom, Rey Mar was actively involved in his community, including collecting food packs to donate to The Humanity Project organization in Moncton. Rey Mar completed his program in December 2020 but returned to NBCC in April 2021 to continue his studies in the Business Administration: Accounting program.

Jill is a mother of three from Hampton who returned to the classroom after 22 years. She excelled academically in her program, all while balancing her busy family life. After graduation, Jill plans to pursue her Third Class Power License and hopes to find work in the southwest region of New Brunswick.

Andrea is a true leader both inside and outside of the classroom. She is an exceptional learner who was always willing to help her classmates. In her free time, Andrea volunteered with Habitat for Humanity and taught Spanish classes organized by The Culture Hub, a non-profit organization in Moncton.

School of Health and Wellness

Frances, who lives in New Maryland, is actively involved with several community organizations, including Fredericton Community Kitchens and the Fredericton Youth Hockey Association. She is also a member of the Atlantic Equity and Research Alliance.

Montana served as a Student Council Representative and consistently kept her classmates informed and up to date throughout the year. Montana also demonstrated leadership outside of the classroom by volunteering at vaccine clinics, where she helped prepare syringes.

A mature student from Saint John, Matthew maintained a part-time job but still always found time to support and encourage his classmates. During his time at NBCC, he also completed a research project for a local tech start-up.

Susannie is a dedicated learner, and this year she tutored fellow IT students on a volunteer basis. Susannie is a mother who worked part-time during her studies. She’s also a volunteer with Youth Impact Jeunesse, a charitable organization offering residential and community outreach services for homeless and at-risk youth across New Brunswick.

School of Trades and Apprenticeship

Megan, a resident of Centreville, was actively involved in the NBCC community, serving as a Peer Tutor and participating in College-wide Service Days. After graduation, Megan plans to pursue her Red Seal certification.

Elizabeth took on the leadership role of Student Council Representative for her class. Academically, she was at the top of her class and consistently performed well in the practical components of her program.

Tapping into the power of education to change lives

From student, to alumna, to staff