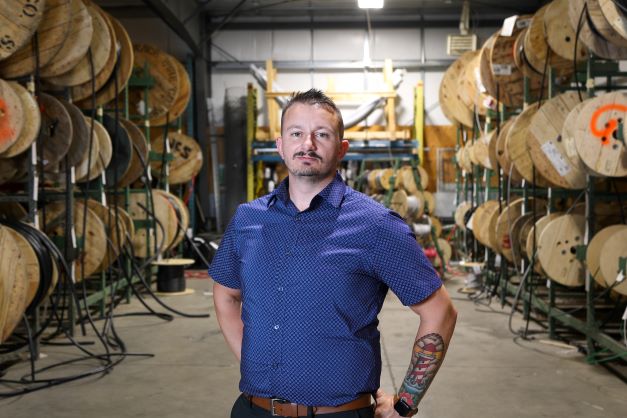 Mathieu Savoie is a rising star on the Atlantic Canada telecommunications scene, but his educational path didn’t exactly follow a traditional route. His high school education was prematurely interrupted, but he never gave up on learning. He got his GED, shortly before welcoming a second child to his young family. After a few years in the workforce, he decided to follow his lifelong passion for technology at NBCC.

After graduation, he worked for a national telecommunications contractor while obtaining his professional technologist and project manager certifications. In 2017, his experience in building fibre optic systems led him to manage a first-of-its-kind rural Atlantic Canadian broadband project,from design to construction. This project is helping bridge the telecommunications gap in rural Nova Scotia and help keep families and businesses connected and competitive with the rest of Canada, while effecting a significant improvement in emergency service coverage to help save lives and improve health outcomes. That project model is now being used to build other similar nationwide.

Mathieu has also worked on trans-Canadian and trans-Atlantic fibre links connecting major North American networks to European networks and beyond. He continues to consult on rural broadband internet networks across Canada and rural areas of the United States.

Mathieu’s leadership in the community includes helping newcomers to Canada find employment and settle in New Brunswick, contributing to the province’s diversity and population growth. He has also volunteered on professional boards to advance the project management profession and bridge the gap between skilled job seekers and potential employers.

Mathieu has demonstrated a strong commitment to developing skills in the telecommunications industry in New Brunswick. He has a bright future ahead of him as he continues to change the way New Brunswick connects to the world.

Making memories for the community

The sweet taste of entrepreneurship

Recent alumnus gives back to community