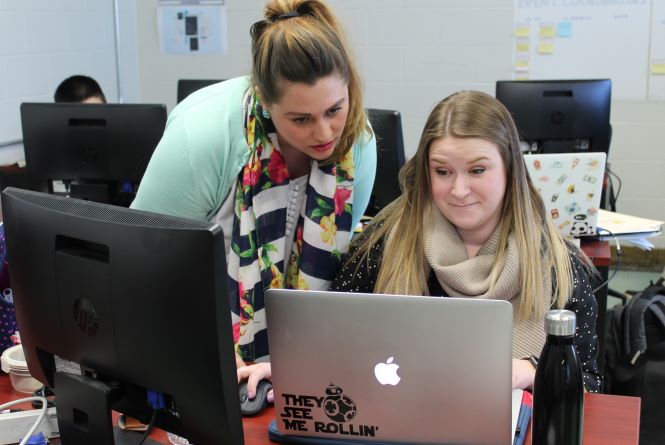 MONCTON – At New Brunswick Community College (NBCC), students are learning how to transform lives and communities with the skills they’re acquiring. A documentary project by the Graphics and Communications Design class at the Moncton Campus provides a shining example of how NBCC learners are making a difference in their community.

Following a class presentation by Charles Burrell, founder of The Humanity Project, the students were tasked with filming and producing mini-documentaries about the issue of rising homelessness in Moncton. Nine teams of two students had two weeks to sketch, script, story board, produce and edit their films, then present them to their “client,” Burrell.

For instructor Naomi McGraw, the project was an important lesson in not just communications, but in giving back to the community.

“I’ve always believed that we all have something give, and time and money aren’t the only options,” she said. “You can always offer your expertise, skills or services. They worked so hard on this project.”

Students approached the documentary project as they would a real-world work assignment. They met with the client to determine the deliverables and pitched their finished product to him.

Students Krystel Murphy and Sara Canova produced Life Without A Roof, which retraced the steps of the homeless population in their daily lives. At the time of filming, the emergency out-of-the-cold shelter was not yet in operation and the students were overwhelmed by some of the images they captured.

“It was really eye-opening,” said Canova. “Under the (Gunningsville) bridge there were a lot of cardboard boxes.”

“We found a bench with all of someone’s belongings on it,” added Murphy. “It was kind of out of the way and we realized that someone was living there.”

Their documentary follows a route from the bridge to Harvest House, then to the Ray of Hope Needy Kitchen, then to the Moncton Public Library, then to The Humanity Project and finally to Nazareth House. Daley and Canova walked the route themselves while filming and quickly became aware of the difficulty of covering such a large distance on foot in bad weather.

“We walked all around the city to the locations where homeless people go to access meals and services,” said Murphy. “It’s cold, it’s wet, they have no winter clothes, they can’t keep their resume dry.”

“It became very emotional for us when we realized what they have to go through in the run of a day,” added Canova. “This project was great for us as a client experience, but mostly, it was a big reminder to give back our skills to someone who needs them, to give back somehow.”

As their instructor, McGraw was gratified not just with the quality of their work, but also with their new perspective.

“These two girls went above and beyond,” she said. “They worked so hard on that video and they took steps to learn the harsh reality of homelessness in our community. That was the goal; to change their perspective.”

Extending our reach through innovation

Taking PRIDE in our culture of belonging