A better life for learners and the community 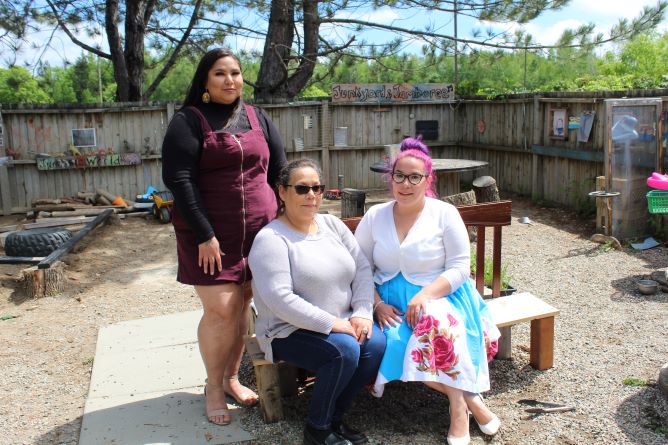 ESGENOOPETITJ FIRST NATION – At Esgenoopetitj First Nation, a group of new graduates have taken steps to improve their own lives, as well as the lives of those in their community.

The first Early Childhood Educator class from Esgenoopetitj is graduating from NBCC Miramichi Campus on Friday, June 21. They completed their studies in their community, learning from a teacher who is also a community member.

“I’m from Esgenoopetitj, so I know that the need for qualified educators exists in the community,” said instructor Danielle Larry. “I feel so proud to have been a part of this. It’s a pretty big deal to have this in the community, delivered by a First Nations person.”

The two-year program was delivered at Esgenoopetitj as a pilot project. While the curriculum for the program was exactly the same as the ECE program offered at other NBCC locations, Larry was able to incorporate some traditional Indigenous customs and learning.

“When it came to assignments, I always tried to incorporate some of our culture within them,” she said. “I tried to make it more like what they’ll actually be doing in the community.”

Among the students in the ECE class at Esgenoopetitj were Kendall Ward and her mother, Noreen Dedam. Both were participating in a Workplace Essential Skills program when they heard about the pilot project being offered in their community.

“I love a challenge,” said Ward. “Knowing that it was going to be in our community, it was very convenient for us because we didn’t have to travel.”

The convenience factor was huge for Ward, who juggles motherhood with two jobs. She works evenings as a bartender and, during the lobster season, takes part in the commercial fishery. The time she would have spent travelling to Miramichi for the program became time she could spend with her son, she said.

For Dedam, returning to the classroom after a 30-year absence was overwhelming. Being able to study in her own community helped her transition back into a learning environment.

“It was an awesome idea for NBCC to bring it to our community,” said Dedam, who has already accepted a position at a daycare. “This program has given me the foundation for a good income.”

Brandy Mitchell, a young mother of a toddler, also completed the program. While she was studying as Esgenoopetitj, her boyfriend was taking the Heavy Equipment Service Technician program at the Miramichi Campus.

“We shared the same journey of learning,” she said. “It helped us understand each other more. And the course helped me help my son. He has a speech delay, and because of what I learned in the course, I was able to get him diagnosed early.”

All three women are proud of their accomplishments and eager to share their new skills with their community.

“We’re the front line of bringing these children up to have a better chance at life,” said Dedam. “We want to make sure these kids are getting a good start in life. That’s why we did this course.”

Alumni find their way back to NBCC

Fashion and trivia help students get ready for winter

“The gang” is still making an impact, more than 50 years later